It isn't often we think about Stoicism and art. Try as I might, I can't think of too many lines of text where any of the major Stoics even spoke of it.

Yet when I was watching a video of Erik Wiegardt and saw in the background a man with a triangle body painted and hung on the wall, it seemed to me art had philosophical value. I later listen to an interview in which he explained it, though for the life of me, I can't remember the reason why he painted it. But it did get me thinking that art would be a good way to express Stoic ideas.

A few years ago, I drew a picture I called the Stoic Sage. It's a simple painting, but it has meaning to me: 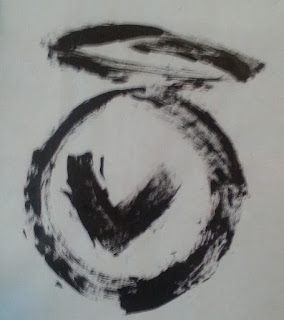 The Sage is a circle because it represent completeness. The V is for virtue. The halo means the sage is a good person. To you, it might look like the paintbrush kind of just fell wherever. Ah, but that's art, isn't it?

The thing about this challenge is that you don't have to be good at art at all to do this. This is just some simple shapes, yet I'm happy with the result because it reminds me every time I look at it what it means.

This week I want you to draw some Stoic concepts. One a day, if possible.

Maybe a line from Meditations caught your eye. I remember reading a line about how one should be a like a cliff-side taking the ocean on, never moving. So I drew a little cliff-side with little waves hitting it.

Here's some ideas for you, to kick you off:
Now, once you've done a few, choose one to frame and put on the wall. Maybe even share it here or anywhere else.

Alright, I'm going to admit it; I haven't been keeping up with mine. I was doing it once a week as a reflection, but it wasn't working too well as the habit never stuck. But thanks to this post on r/Stoicism, I've renewed by effort in making it an everyday thing.
at February 05, 2016

Email ThisBlogThis!Share to TwitterShare to FacebookShare to Pinterest
Labels: Year of Stoic Living

On Personal Thoughts About Personal Epistemology

There are, to my mind, only two ways of understanding the world: the senses and our reasoning. About our senses, we know of our basic o...